What The Women Really Want 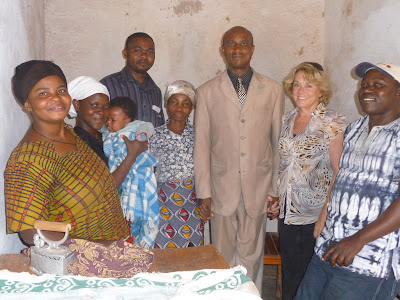 After the women and machines were relocated, I spoke with Yves who told me something very interesting: He and the women survivors have been working privately for over two years to obtain NGO status. This is not an easy achievement, and they have done everything but finish paying the attorney. That is very impressive.

The Friday following the move, I met with the women as a group at the OCET building to discuss their options.

They began by voting Yves their President, as he has been their counselor for over 3 years and they trust him to act in their best interests. They voted Pasqualine to be their Representative and Spokesperson, as she has already taken a leadership role with the group and is literate. They chose not to include other committee members at this time. I am to act as Consultant who helps them finance their projects. 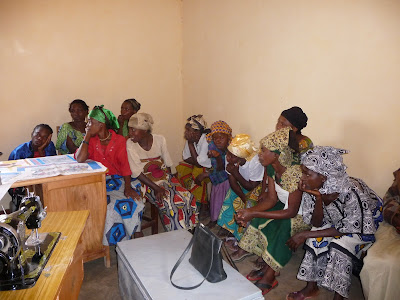 The women discuss their options.

After more discussion, they decided to return to the space they previously occupied for the following reasons:

They voted to hire the OCET sewing teacher, who was at the meeting and fixed the machines while we talked. She is a dedicated teacher, a woman who takes her job seriously. Unlike the previous sewing teachers, she has a diploma in teaching dressmaking. The women were delighted by her expertise and excited for classed to begin. She said many of the women will be at Beginning Dressmaker Level in six months with lessons 3x per week. 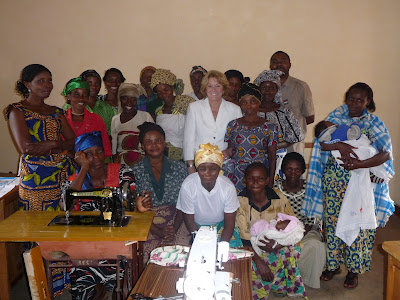 While the women continue their sewing classes, they plan to generate income by renting the sewing machines to other dressmakers. They can take lessons in the morning and rent the machines in the afternoon. It turns out that fourteen sewing machines in a building with cement floor and intact roof is a luxury in Bukavu, so this passive income could be lucrative.

Income generated this way will be recorded by an accountant of their choosing and split equally among the women survivors, after expenses such as electricity and machine up-keep are deducted. A sign will be made to advertise this service.

No more will donations from abroad be sent directly to any one person. All contributions and income will be recorded and deposited in their NGO account by an accountant in Bukavu. Accounts payable will be logged in and backed up by receipts, so that all disbursements will be accounted for and transparent.

Disbursements will be made through group decision.

I am delighted how well this group of women survivors is evolving. Despite set-backs, they are becoming more self-confident, working together as a cohesive group, and taking responsibility for their future.

My interpreter for this meeting was Roland, a 21-year old Congolese kid with wisdom beyond his years. After listening to the women for some time, he turned to me and said, "These women are really tough." And, yes, it is true: they are tough . . . that is why they are still alive. 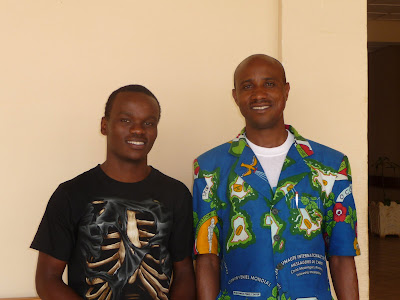 Roland, my translator, and Honorable Mubalama

The next day, Honorable David Mubalama, Senator for the Province of South Kivu, stopped by to lend his support to the re-opening of the women's center. It is now an NGO of its own, doing business as Action des Voluntaires Developement Communciutaire (AVDC).

Congratulations Yves and the women of AVDC! You are doing a great job!

Posted by Dr. Victoria at 5:45 AM No comments: Links to this post

A Change of Plans 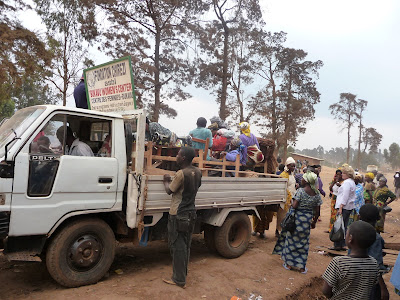 Moving the women and machines.


Well, folks, I haven't written for a while, because I've been submerged in the dark side of doing business in Africa: misappropriation of funds, exploitation of women, collusion, and theft. Not much fun, but inevitable if one is going to help women in DR Congo. . . I am learning.

When I returned to Bukavu in mid-June, I realized things were amiss when I was suddenly left out of committee meetings at the Bukavu Women's Center. Then funds sent to a director went missing and the staff went unpaid. I further realized that over $10,000 had been donated to the Center since it opened a year ago last August, and the women were still struggling with homelessness, malnutrition, and unresolved medical issues. 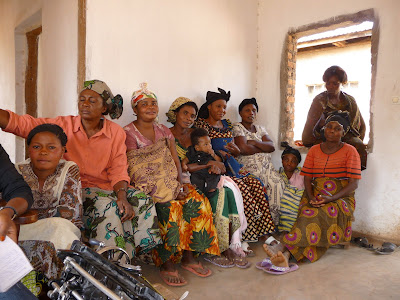 The following week, I met with the women, who were outraged that the sewing teacher
After much circuitous talk and no resolution, I rented a truck and moved the sewing machines, tables, and other equipment to another site where the women and machines would be safe. The women were delighted to escape the sewing teacher, who refused to leave his business and sat glumly by as the sewing center was loaded onto the truck. 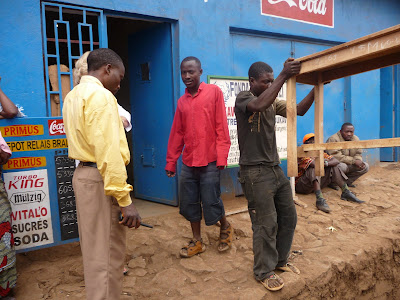 The former sewing teacher watches his business go out the door.
The situation was worse than I had imagined. Both sewing teachers, brothers, were pastors of a church that was closely affiliated with the Director's church, and which excluded the women while it exploited them. The sewing teachers/pastors had been running a lucrative dressmaking business using the donated machines and women for labor. Profits from this business were being split with the directors, nothing going to the women who desperately needed it and did most of the work. 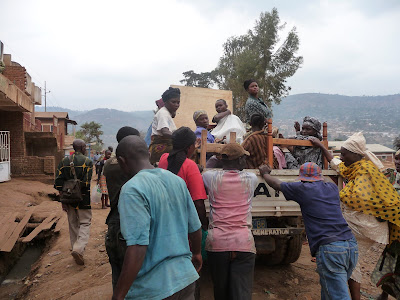 The moving truck needs a little help to get started.
The women had been threatened with explusion from the center if they told the truth about this arrangement to the donors.
We took everything but three machines, two of which had been stripped of parts by the sewing teacher. Nothing was taken that was not paid for by donations I generated. Luckily, the more expensive Mercedes and Edger machines were still there, but unfortunately not intact. 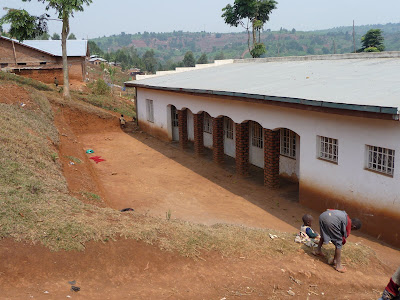 The OCET building is located south of Bukavu near Panzi Hospital.
Everything was moved to OCET, a well-established NGO that provides education and training for girls who have been raped and impregnated, legal advocacy to prosecute their rapists, and training in women's rights, social action, and environmentalism.
OCET was founded and is run by my friend Bellah and her husband, Sylvester, an attorney who advocates for women victims of SGBV in the Congo. Bellah is a smart woman with an MBA; she is accountant and grant writer for OCET, as well as accountant for the Shilo Hospital in Nyangezi. I love working with Bellah, because she feels deeply about these women and gets as upset as I do when funds intended for the disadvantaged go the greedy instead of the needy. 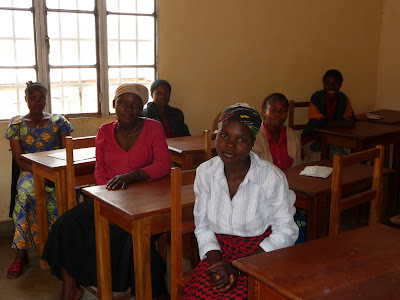 Girl students in a literacy class at OCET.
Hortense, my translator, was a great help with the move and later getting the women organized. She has worked for Women for Women for some years now as an administrator, trainer, and conflict negotiator. She knows this population well, having heard their stories for over four years. Recently, she translated for the Holocaust Museum when they were in Bukavu collecting stories of rape and torture from the women.
Below Hortense everyone's name, address, age, and the number and ages of their children. 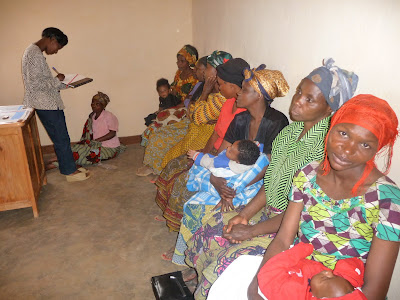 Now the women and machines were safe in their new home at OCET. But I acted precipitously, initiating change in a vacuum, before things got any worse. So now that the deed was done, Is this what the women really want? Stay tuned as the plot thickens. . .

With love and gratitude,
Posted by Dr. Victoria at 4:14 AM No comments: Links to this post Many of you have written asking how you can make a difference in these women's lives.

The first thing you can do is spread the word about bringing PEACE to DR Congo. The second best thing to do is to donate to grassroots organizations work in DRC. My organization, Empower Congo Women, is now a pubic charity dedicated to helping Congolese women survivors of sexual violence heal, rebuild their live, and prosper.

Please send your checks to:

OR pay online through paypal at www.empowercongowomen.org

Your donations will be tax-exempt.

The women and I thank you for any contribution you make to help them.

You may rest assured that all monies donated to the women survivors and their families will go directly to support their training, counseling, food, school supplies, medical needs, and spiritual well-being.

Posted by Dr. Victoria at 11:46 PM No comments: Links to this post