2011 - A Year of Optimism and Continued Growth

Empower Congo Women initiated and completed several successful projects this year, all of which empowered women and girls while rebuilding community in eastern DRC. Still a small grassroots organization, ECW relies on your donations to continue to do good work for the beleaguered people of Congo.
HELP US MAKE A DIFFERENCE:  http://empowercongowomen.org/donate.php
Ushindi Center's First Graduation Ceremony

This past July, 20 women war survivors and 10 at-risk young women graduated from Ushindi Center’s vocational training program. All had completed the graduation requirements for sewing certification, and most received a graduation kit consisting of a sewing machine, fabric and notions to start them on the road to self-reliance. Women with other vocational skills were given the equivalent in cash to start their own business.

The Graduation Ceremony was attended by Rotary Club of Bukavu members, friends of graduates, and local dignitaries, including police-woman Colonel Honorine, head of Women’s Protection Unit in Bukavu.

Congratulatory speeches were made, and each woman received a Certificate of Completion for her achievement. A delicious buffet was served and people danced to Bashi music.
Please contribute here so that Ushindi Center can continue to empower women through vocational skills training, trauma healing and leadership development.
DONATE NOW! http://empowercongowomen.org/donate.php
Mumosho Peace Market
Working in conjunction with ABFEK and Action Kivu, both community-based charities in eastern DRC, Empower Congo Women raised funds from five International Rotary Clubs (Montecito, Santa Maria, Wakefield,  Ottawa, Korea) and Falling Whistles, and LA-based NGO, to sponsor construction of a large, pavilion-style market in Mumosho.
Market construction was overseen by Project Manager, Amani Matabaro, who finished the project on time and on budget, an unusual feat in any country! He was given timely advice by Mark Magid, Montecito Rotary's International Service Chair, who traveled to DRC to contribute his expertise as a building contractor.

The market measures 80’ by 30’ and houses 100 vendors, including butchers whose stalls and knives are kept at a distance. A latrine project was later completed to maintain healthy sanitation in the area, the majority of funds being donated by actress Robin Wright.

Mumosho’s strategic location on the Ruzizi River border of DRC and Rwanda makes it an ideal place to rebuild peaceful trade relations between the two countries. It is estimated that over 30,000 people will benefit from the market being in the area.


Construction of the market in July has already brought economic improvement to the area. Women vendors are benefiting in particular, because, with the completion of adjacent storage buildings, they no longer have to carry back-breaking loads to and from market. Buyers as well as sellers benefit, because protection from the torrential rain allows the market to stay open all year long.
Rotary Grants


Rotary International issued two grants this year to benefit projects initiated by Empower Congo Women in eastern DRC. Rotary Club of Montecito sponsored both grants, and Rotary Club of Bukavu was the Host Partner who oversaw the funding process.
Ushindi Center was recipient of a grant that furnished it with sewing equipment, funded its sewing teachers and trainers for a year, sent Ushindi children to school, and paid training costs for the women to become certified trauma healers.
A groupment of villages in Mumosho received the second grant, which established a Demonstration Farm for sustainable agriculture practices and improved animal husbandry by purchasing goats and other small animals, animal feed, inoculations, seeds, and farm equipment. This grant also provided a women’s collective with sewing equipment and paid exit exam fees for girls and orphans who would otherwise be unable to begin secondary school in the fall.
Ushindi Center Exports Products for Sale in USA

The first shipment of aprons made by women and girls at the Ushindi vocational center was received in Santa Barbara, USA in October. The aprons are made of a patchwork of beautiful African fabrics, all hand sewn, lined and fully washable. A second shipment was received in December, just in time for Christmas gifts, this batch featuring child-sized aprons and matching child/parent sets. 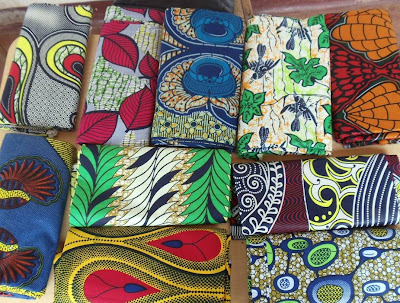 Aprons made from gorgeous fabric like this will be posted for sale on the ECW website in mid-January, so check our website often so you don't miss out! Also, get ready for our clothing line, which will premier this spring.

Posted by Dr. Victoria at 7:01 PM No comments: Links to this post