Three years have passed since I was last in Congo and that long since I've written this blog. Nevertheless, our non-profit organization, Empower Congo Women (ECW), is going strong!

A number of amazing projects have come to fruition in that time, all made possible by the collaboration of like-minded souls like yourself who share the vision of a peaceful, prospering Congo.

We deeply appreciate your on-going support for ECW's projects. In doing so, you play a major role in making real, lasting change happen in Congo. Check out what we've been able to accomplish in the last few years working together:


This beautiful building is our largest project to date and has become the mainstay of community life in Mumosho. A rallying place for community events, workshops, such as family planning, women's rights, and peace negotiations among ex-combatants, are held here.

The center serves many educational needs for the community: as schoolroom for literacy and sewing classes, vocational training site for entrepreneurs, organic agriculture hub, and health center promoting child/maternal health.

Additionally, the MWC functions as Safe House for Teen Mothers. The center is able to feed and house ten young women (and their babies) at a time. Since 2013, 45 young women have received vocational training here and returned to their villages as valuable members of society instead of outcasts. 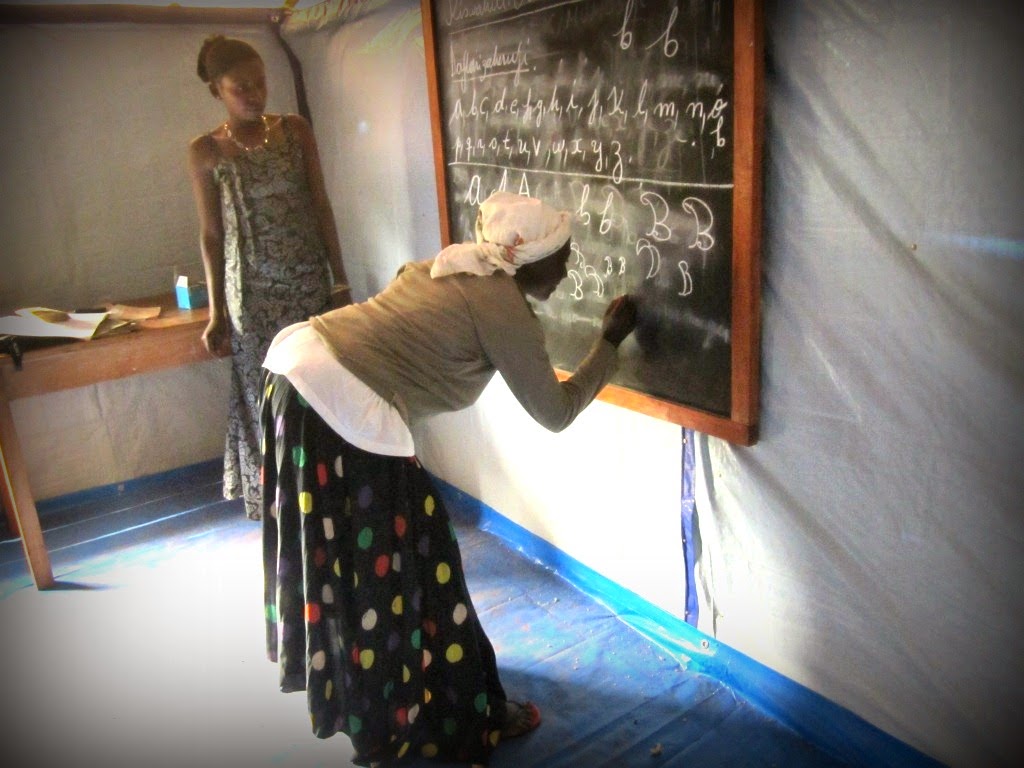 Literacy classes are popular with local women, most of whom cannot read or write, because girls are often kept home from school to help with younger children. Young women are especially eager to become literate so they can vote for President in the upcoming Congolese election.
The center was created through the collaboration of many people. The building was designed by Amani Matabaro, director of ABFEK, a Congolese charity, who sketched it on a napkin and then managed its construction.

The project was sponsored by Rotary Club of Montecito in conjunction with 30 other Rotary Clubs and Rotary International. Private donors and fundraising events were invaluable in making this dream become a reality.

In 2014, the center was honored as an exemplary Rotary project in District 5190, which covers 12 countries in central Africa.

"My Goat is Your Goat" Project

Organized by Amani at the Mumosho Women's Center, this project has been a huge success in building community as well as improving food capacity.

Goats are more than just animals to the Congolese. Their value extends far beyond being producers of meat and milk: They are given as dowry presents and land payment, as well as settlement in legal disputes.  When you give someone a goat, it means you are friends for life. 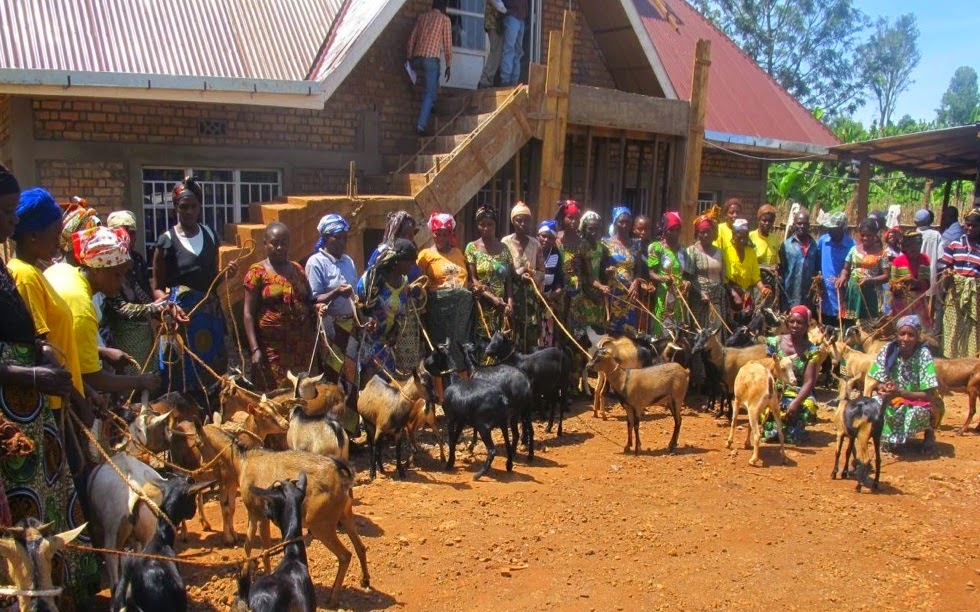 This is how it works: MWC gives a woman a pregnant goat that she cares for lovingly so the first kid will be healthy. Instead of being sold, it is given to another woman, who in turn passes her first kid on to another woman. This way women become sisters and community is built between families, with even the poorest women being included.

Amani uses this program to teach ethical leadership, explaining that when people care for another's goat, or receive one from another person, they become participating members of the community instead of looking out only for themselves.

Two workshops were given--one for men, the other for women. There was a huge turnout, both sexes wanting some form of birth control. Unfortunately, there are few clinics offering birth control, because Congo is a predominately Catholic country. However, everyone learned about women's high mortality rate after the 5th child. Until recently, even educated Congolese believed that families with 12 children was desirable.

The MWC is working toward becoming sustainable by selling its sewing projects, organic produce, baskets, and small animals at local markets. It is not sustainable yet; there are ongoing expenses for teachers, food for the teen mothers and their children, and center upkeep. Please consider donating to keep our programs going. DONATE NOW

Rape is still epidemic in Congo, and young girls are frequently rape victims. A pregnant teenager with no husband is at risk, because she is often shunned by the community and has no job skills to support herself or the child. This is especially true when she is a rape survivor (sad but true).

All the teen moms take literacy classes and learn how to sew. They are taught hygiene and expected to come to class clean, which builds pride. They take classes on child health, nutrition, and cooking.

The young women generate income for themselves and the center by selling school uniforms to local children. Some learn small animal husbandry. . . how to raise healthy chickens, rabbits, and guinea pigs for sale at the Mumosho Peace Market. They also learn how to manage money in weekly entrepreneurial classes.

Recently, 10 young mothers graduates were given sewing machines and fabric to start their own businesses. With a vocation and new-found pride, they are able to rejoin their community on good terms.

MWC programs have literally saved their lives and the lives of their children. No longer cast out, they are respected members of the community whose children go to school. Please DONATE NOW to keep the Safe House and its life-saving programs open!

WHY TO DONATE TO ECW

#1 reason: Democratic Republic of Congo is ranked the No. 1 poorest country in the world. Despite its enormous mineral wealth, the majority of Congolese live in extreme poverty. Rape continues to be epidemic with an estimated 1150 women being raped there every day.

Your donation makes it possible for Congolese women to become financially self-sufficient and stand up against this terrible violence toward women. Donors
also support programs that build community, provide literacy and health education, and promote peace and reconciliation in eastern Congo.

#2 reason: You can be confident that your donations go to support projects, not administrative costs. I am available to answer any questions, and will be sending project reports from Congo in September.

If there is a program you wish to support or create, please contact me directly to discuss how we can do this.  ECW's mission is to turn visions into reality.  drvictoria.bentley@gmail.com

2015 PROJECTS:
My pledge is to keep sending updates about Empower Congo Women's projects so you can track the progress of what your donations are providing.

Again, my heart is filled with gratitude to you all.

Think about GETTING INVOLVED and developing projects with us!
WE NEED YOU!!! and it's really, really FUN!

Posted by Dr. Victoria at 3:31 PM No comments: Links to this post