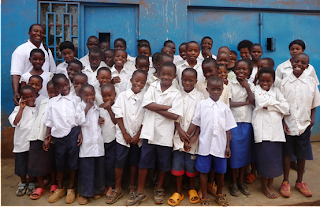 Half the school children sponsored by Ushindi Center pose on first day of school.

2009 has been a successful year for Empower Congo Women, a grassroots organization dedicated to helping Congolese women heal, rebuild their lives and prosper in Democratic Republic of Congo (DRC). Looking back over the year, we feel very fortunate to have had so many caring people supporting us.
As you may know, conflict has been on-going in northeastern DRC for many years, the majority of causalities being innocent women and children. Rape is still rampant in Congo, worse than ever; literally hundreds of thousands of women have been raped and then abandoned to care for their children alone.  A large percentage of them migrate to the city of Bukavu, where they hope to find food and safe shelter. But competition for resources is fierce and many perish there.
To address this humanitarian crisis, Empower Congo Women founded Ushindi Center in Bukavu in late 2008.  2009 marks the first full year of its operation. The Center's growth in both outreach and program development has been substantial. Not only is Empower Congo Women now a 501(c)3 non-profit corporation in the US, but Ushindi Center became a legal charity in DRC this November!
Through the generosity of our donors, Ushindi Center was able to lift over 200 vulnerable women and children out of extreme poverty this year by providing vocational training and microcredit. A full-time sewing teacher taught the women to make school uniforms, always lucrative, while more advanced seamstresses became dressmakers. All the women made rag dolls, which are popular gift items in the US. 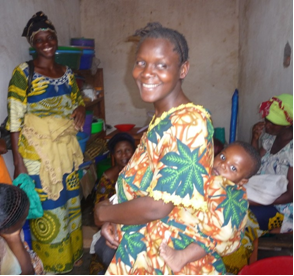 Hand-woven bags, strong and colorful like the Congolese people, were our biggest seller this year. During my August trip, the women wove 75 bags, which I easily sold when I got home. Orders have poured in for the bags, so I have been busy researching ways to export them to the US. If anyone can help me importing them, I could use the help!
We were able to fund 42 microloans to center members this year. The women bought fish, tomatoes, flour, oil, peppers, bread, salt and sugar at source and sold them in their neighborhoods for a profit; another woman bought shoes and did a brisk business selling them on the street. Others bought charcoal and bananas in the country and carried the heavy loads to Bukavu for sale in the central market. One enterprising woman bought black yarn and braided ceremonial wigs for girls. Repayment rate has been 95%.
A breakthrough in mental health occurred this year when a Swedish therapist taught the women energy psychology. The women quickly learned the process, then practiced on each other until they were calm, relaxed and happy. The therapy proved so effective in removing long-standing post-traumatic symptoms, such as insomnia, headaches and anger, that the women now use the techniques to help not only themselves but their family and neighbors as well.
A medical fund was set up at Ciriri Hospital where the women and their families receive free medical treatment. Amazingly affordable, this much-needed program allows members to get medical help for illnesses that have gone untreated for years due to poverty, as well as emergencies that pop up.
Again thanks to our generous donors, we were able to expand Ushindi Center from one to two rooms in August, then to 7 rooms last month, leasing the entire building for one year. The expansion allows the women to train quietly upstairs, off the busy street, while the downstairs is converted to retail space that sells their products and consignment goods. Because the store has heavy foot traffic, it could become self-sufficient. 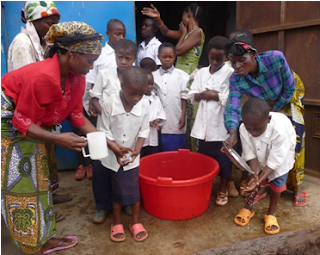 Women wash children’s hands preparing for a meal to celebrate beginning of school.
A highpoint of the year was the outpouring of support for a School Fund. Thanks to that, we were able to enroll 70 primary- and secondary-age children of women survivors in school for the 2090-2010 academic year.  Not only did paying the school fees give parents a financial break, but it imbued the children with pride knowing that they matter to others.
Very exciting news came in late November when Ushindi Center was notified it would receive an International Rotary Grant sponsored jointly by Montecito Rotary Club, where I am a member, and District 5240 of southern California.  The Bukavu Rotary Club has agreed to be Host Partner, and funding will proceed in early March.
With this grant, Ushindi Center will be able to expand its staff and develop additional vocational training programs, such as soap-making, fabric dyeing, embroidery, and baking. We plan to enlarge the education component to include family planning and maternal/child health, nutrition, cooking lessons, literacy classes, and entrepreneurship. Advanced classes in energy psychology are planned so the women can become proficient enough to teach other women survivors.
Not only will this grant improve Ushindi Center programs, but it will send 200 disadvantaged children to primary and secondary school for a year!
Empower Congo Women and Ushindi Center have never been stronger. As we head into 2010, we see that our programs have the capacity to make a much broader impact. Working together, we have the potential to bring hope, stability and peace to the region by building infrastructure from the ground up-- by empowering women with microcredit and educating girls.
Will you join us in this bold endeavor? Our next goal is to fund revolving microloans for 100 women survivors of sexual violence, which will positively affect not only their lives but the lives of their families, upwards of 1000 people! We have the administrative structure in place to do this . . . Now all we need are your donations!
With gratitude, we send blessings to you and your family for the coming New Year. This amazing work would not be possible without the support of compassionate friends like YOU! 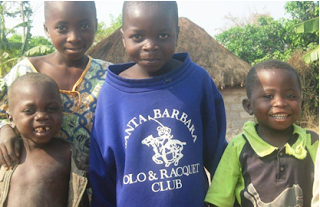 Photograph taken in interior of Congo by UN worker.