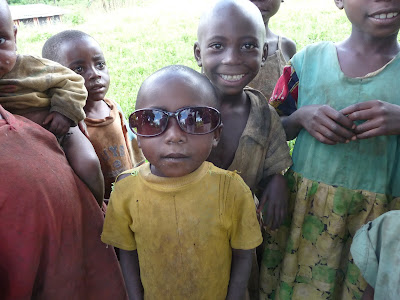 
In my  9/24/2010 blog, I wrote about my friends Margaret Johnson and Betty Merner who travelled from Rhode Island to Congo to teach sewing and ended up starting a project to secure local pygmy "a home of their own."

So the Pygmy Land Project (PLP) was begun to purchase land near the Kahuzi-Biega National Park, with a fundraising goal of $50,000 to buy about 25 acres. Funds were to be channelled through Empower Congo Women. The land was to be negotiated and secured by Dominique Bikaba, a Congolese conservationist and friend of the pygmy.

The pygmy are the indigenous people of Africa. For millennium the "forest people" lived in symbiotic relationship with nature until the 1970s when the lush forests of DRC were declared National Parks, and the pygmy were evicted.

Since then, the pygmy have suffered much. Living on borrowed land outside the magnificent park that was once their home, they are marginalized, violated, and hunted for sport. They live in extreme poverty with little hope of improvement.

Margaret and Betty were profoundly touched by the beautiful pygmy children, the extreme poverty, and the despair that haunts displaced people. 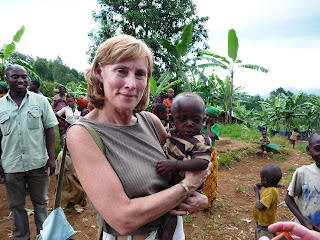 After 4 years of fund raising, the PLP realized its goal and 27+ acres of land were purchased and deeded to the Buyungule community as a whole. Ownership is permanent, with stipulations the land will always be theirs.

The land will be used for both settlement and agriculture. The 150 families in the community have moved from a 3-acre plot to 27 acres, which enables them to farm food crops with the possibility of becoming sustainable.

I am still amazed two women from the US bought land for a pygmy community half-way around the world! Before the trip, they knew little about Congo and nothing about the pygmy. It is a testament to how much each of us can do when we see the need and take action.

We believe this may be the first time land was bought for the pygmy in Congo! Congratulations Margaret and Betty!!! Well done!

Next on the agenda

Margaret, Betty and I are returning to Congo this September for a ceremony to dedicate the land. Plans are in the works to build a school on the property, since their last school was destroyed by Rwandan soldiers 5 years ago.

The pygmy are holders of ancient wisdom regarding jungle plants and animals. We need to keep this unique intelligence alive to benefit the entire planet.


Posted by Dr. Victoria at 4:30 PM No comments: Links to this post