The groupment of Mumosho lies 10 km south of Bukavu on the road to Nyangezi, an area which incorporates 8 villages with a population of roughly 31,000. Located on the Ruzizi River, it lies on the border of Rwanda. Before the wars began in 1994, the people of the two countries shared their lives peacefully, passing back and forth across the river to trade, attend school, and marry. 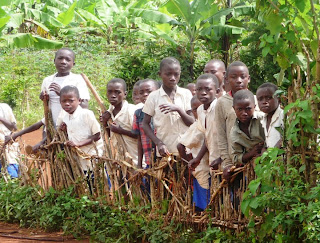 Children too poor to attend outside the school fence looking in
The area suffered greatly from wars waged on its soil from 1996-2003. Due to Mumosho’s strategic location, multiple armed groups passed through, all to the detriment of the people who live there. The fabric of society was severely damaged, with the health, education, economic and sanitation systems almost destroyed. Human rights violations, such as massacres, use of children as soldiers, rape, and sexual slavery rose to alarming levels. 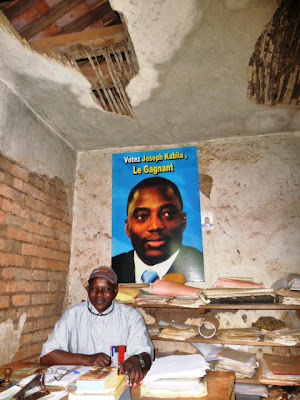 The district Chief of Mumosho in his office
To make matters worse, the Mwami, or Big Chief, who has sovereignty over the area, sold over 400 acres (190 hectares) of good farm land to private interests-- to the World Bank to build a dam, and to Pharmaquina, a German company that grows chichona for quinine, neither of which benefit the population of Mumosho in any way. 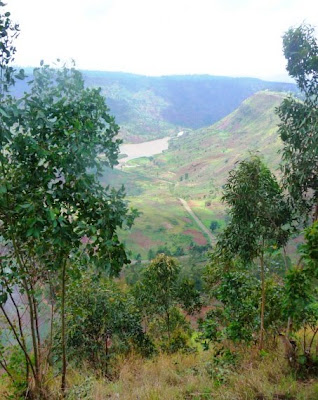 The road to the dam showing land that can no longer be used for farming
To date, no large humanitarian organization has come forward to help; however, two small community-based agencies are doing their best to help the people of Mumosho rebuild their lives.
One is run by Amani Matabaro, a local boy who works in Bukavu for MONUQ (UN forces in DRC) but has come back to help his community. I was introduced to Amani and his wife Amina last November by Hortense Barholere, the Administrator at Ushindi Center, who is Amani's cousin. It was through them that I learned about Mumosho and decided to visit the area.
Amani founded and runs the Welfare of Women and Children in Kivu (ABFEK), a non-profit that supports the Kivu Sewing Workshop, where vulnerable women and girls learn to be dressmakers. http://kivusewingworkshop.org/ It also pays school fees for as many disadvantaged children as their small budget allows. 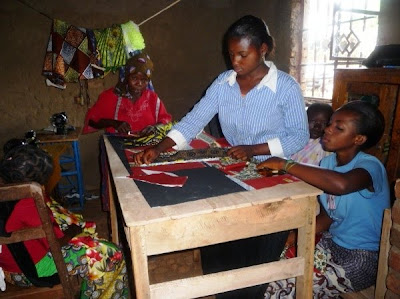 The Kivu Sewing Workshop
The other local agency is the Union fait la Force (UFF), which focuses on teaching local farmers sustainable agriculture practices and modern animal husbandry on a demonstration farm. When I first met Pacifique Kagizi, Director of UFF, he was showing farmers how to use compost to improve the yield of banana trees. 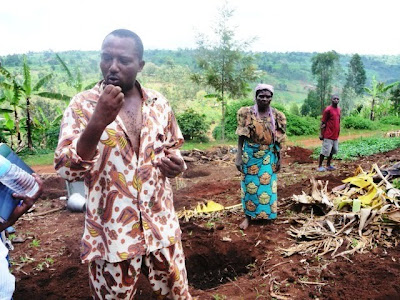 Pacifique explains how compost helps plants grow
Later he showed off the new goat pen, which is raised off the moist ground to keep the animals healthy. 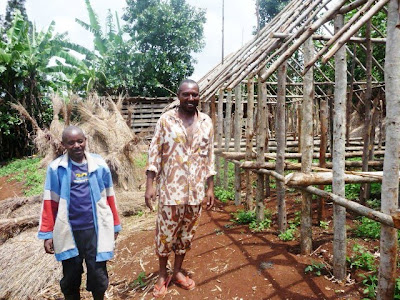 Partially constructed goat pens
The day I toured Mumosho, we visited a primary school that desperately needs help. The walls are made of splintering wood, the tin roof so old and leaky that when it rains (which is often in Congo), the children must huddle in one corner to avoid the deluge that pours through the roof like a sieve into their classroom. 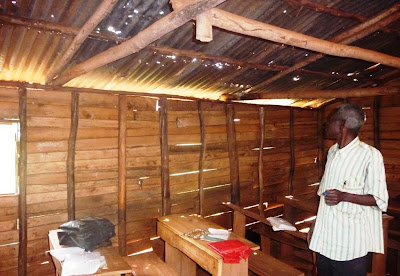 The leaky primary school roof
I also met the school doctor, who I learned has little medicine to treat sick students, not to mention the local people who bring their children to the school infirmary to be treated. There is no hospital in the area, only two small clinics which are poorly supplied and several hours walk away. 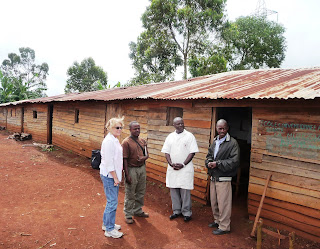 Discussing school needs with Amani, the School Doctor, and the School Principal
I left Mumosho feeling I wanted to do something to help. When I returned to the USA, I spoke about Mumosho to various groups. Two Rotary Clubs came forward to help the school with the leaky roof: Wakefield Rotary (RI) and Santa Maria Rotary (CA), whose donations I carried with me when I returned to Congo earlier this month.
To be continued . . .
With love and gratitude,
Posted by Dr. Victoria at 10:54 AM No comments: Links to this post 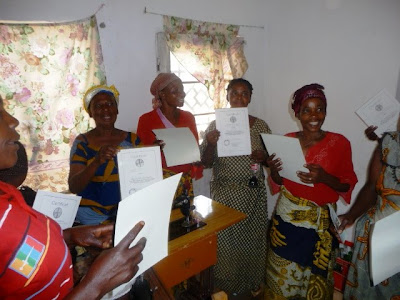 Ushindi Center women with their Certificates.


Those of you following my blog may remember that Ushindi Center women have received trauma therapy in the past from a Swedish therapist named Gunilla Hamne.
The Founder of Peaceful Heart Network, Gunilla has been treating genocide survivors in Rwanda for several years. She teachs TFT, a form of energy psychology, in which the practitioner taps gently on acupressure points on the hands, face and chest to bring relief to trauma symptoms.
Gunilla taught me the technique last fall, and together we treated all the women, then taught them to treat their trauma symptoms themselves. I must admit I was skeptical at first until I saw the results! 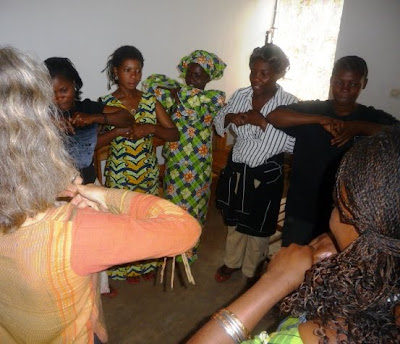 Gunilla teaches body-awareness to teen-age mothers at Ushindi Center.
They learned the process quickly. They now report that they use it on a daily basis to relieve symptoms of post-traumatic stress disorder (PTSD), which are triggered by their difficult living conditions. (We learned that worry about their children and landlords creates stress, which brings back past traumatic memories with their accompanying emotional distress and physical problems)
Personally, I would not have believed how effective this technique is if I had not witnessed the women’s recovery myself. Last week we interviewed them one by one and recorded the miraculous changes they’re experiencing: insomnia and migraine headaches gone, mental confusion replaced with clarity, panic attacks gone, despair and depression lifted, anger turned to kindness, tension to relaxation . . . the results are extraordinary.
So over a two week period, Gunilla and I trained them to treat other people's PTSD. Then working in pairs, they demonstrated the technique and we evaluated their skill level. All passed the test and now possess a certificate of proficiency from Peaceful Heart Network. 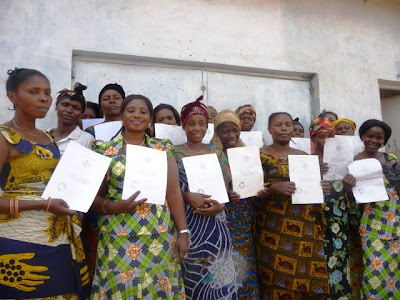 The women are very proud of their achievement. Many speak of treating their children and neighbors, so the circle of healing widens. Bringing relief to their country with energy psychology, they are probably the only group of women survivors of sexual violence in Congo to be certified as trauma healers!
With love and gratitude,
Posted by Dr. Victoria at 11:33 AM 1 comment: Links to this post 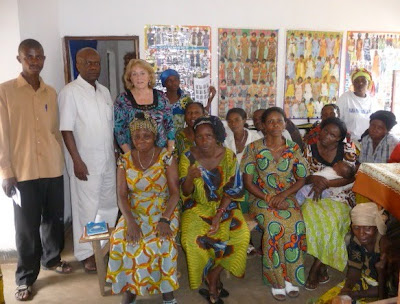 Charles Bisimwa, Past President of the Bukavu Rotary Club, visited Ushindi Center today. Mr. Bisimwa came as an emissary from his club to greet the women who train there.
Mr. Bisimwa is a member of CIALCA (Consortium for improving agriculture-based livelihoods in Central Africa), which is an organization of agronomists that works to improve plant quality and train farmers in sustainable agriculture methods. He spoke about new foods being made from soy beans, food which will improve nutrition and can be sold in the Ushindi Center store. http://www.cialca.org/files/files/TSBF%20planning%20meeting/Presentation%2003%20-%20Katunga%20-%20CIALCA%20Bukavu.pdf
Bukavu Rotary and Montecito Rotary are working together on grants to upgrade vocational training programs for women survivors of sexual violence at Ushindi Center. http://www.montecitorotary.org/ The project will provide additional sewing and embroidery machines, fabric, generators, office equipment, and provisional staff to train the women in advanced dressmaking and store management. In addition, the grant pays school fees for 75 more children, bringing the total of students supported by Ushindi Center to 150.
This grant will be funded in late April and run for 10 months.

With love and gratitude,
Posted by Dr. Victoria at 7:48 AM No comments: Links to this post

Last Friday I got an excited call from a friend who’d just seen Ben Affleck at Panzi Hospital in Bukavu. It was great to hear he was in town advocating for the Congolese people.
Today, a CNN article reported that Ben has launched an initiative to help community-based organizations in Eastern Congo. http://edition.cnn.com/2010/WORLD/africa/03/22/congo.affleck

I am delighted by his direction, because I know many local charities in Bukavu that are doing great work but not getting the attention, or the funds, that they deserve. Overshadowed by larger organizations and often ignored by the press, these small, grassroots agencies do much to maintain the fabric of society in Bukavu.

For example, the Kivu Sewing Workshop provides vocational training for women war survivors in Mumosho, a suburb of Bukavu. http://kivusewingworkshop.org/  It was founded by Amani Matabaro, a local boy whose job with the UN finances his humanitarian projects. Montecito Rotary Club in USA recently offered to sponsor a grant that will build capacity and bring jobs to the area through Amani’s organization. 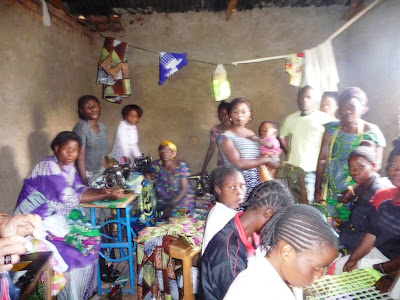 Women training at Kivu Sewing Workshop.
Centre Ushindi is a grassroots agency in Bukavu which empowers women by providing vocational training for survivors of sexual violence, paying school fees for vulnerable children, and educating teen-age mothers. Although it is funded by an American non-profit, center policy is directed by the Congolese women who make up the board and by its members. http://empowercongowomen.org/

Being local and grassroots, Centre Ushindi’s development model is quite different from the international agencies in Bukavu, many of which are big businesses with offices worldwide. They view war survivors as "recipients", who have no say in program development or execution, nor power within the organization, which is funded and administered from abroad.
Because Centre Ushindi is dedicated to bringing peace to Congo by empowering women, they teach women survivors and young mothers how to become self-sufficient while in the program, first with vocational/entrepreneur training and microfinance, then by developing markets for their products. Compared to time-limited programs, this is a more challenging and time-consuming process, because the women remain members until they are back on their feet. 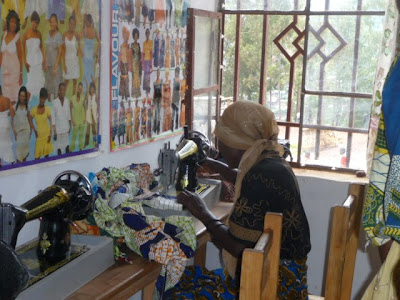 Women are learning advanced dressmaking at Ushindi Center.
If you believe as I do that empowering women is one way to bring peace to Congo, then we must ask, How can Congo be rebuilt if we continue to treat its women survivors as victims and recipients, always tragic, downtrodden, and incapable of directing their lives, and don't give credit to the local organizations which are dedicated to helping others? The solution to Congo's woes is not political or military; it lies in the strength of its women and its community-based organizations, which already do heroic work under very difficult circumstances. . . they just need recognition and support from outside.
So I say, Good work, Ben!!! Glad you're on board!
With love and gratitude,
Posted by Dr. Victoria at 6:55 AM No comments: Links to this post

I’ve been in Bukavu one week now, driving last Sunday with my friend Gunilla from Kigali through Rwanda to DRC, in time to march in the INTERNATIONAL WOMEN'S DAY parade with the Ushindi Center women. 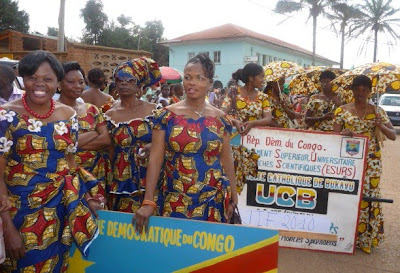 And what a parade it was! Thousands of women waited for hours to march in solidarity down Patrice Lumumba, the main street in Bukavu. The parade was 3-4 times larger than I remember it being 2 years ago. 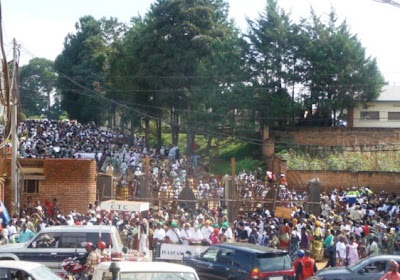 The women marched, sometimes 3 groups wide, each carrying their own banner and dressed in matching libaya. They came from neighboring towns and villages as well as Bukavu-- Ciriri, Bunyarkiri, Walungu, Mumosho, Nyangezi, Mudusa--some walking several days to participate in the event. 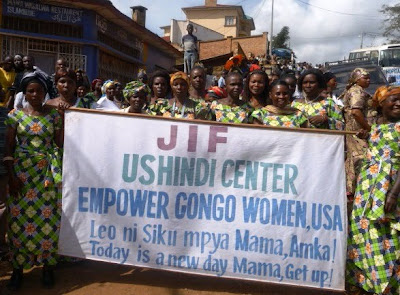 Our Administrator, Hortense Barholere wrote the Ushindi Center banner, which read:
USHINDI CENTER – EMPOWER CONGO WOMEN, USA
Leo ni siku mpya mama, Amka!
Today is a new day Mama, Get Up!
One of my favorite groups was the Conglese women soldiers, who marched and sang with great pride. 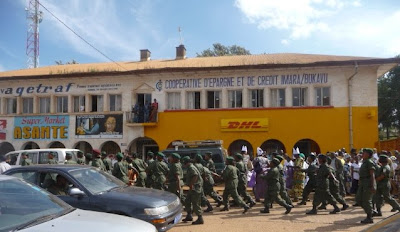 This large group marched in front of us and sang for hours during the parade. These are women who were taken as wives by the rebels, sex slaves who were rescued and are now being repatiated by CARITAS. 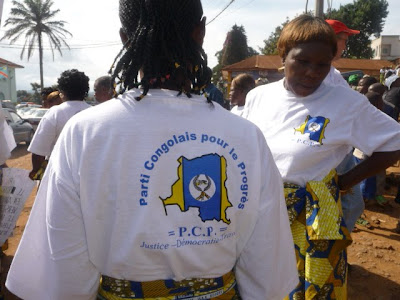 Alice was ill and sat in a UN vehicle with the Bangladeesh policemen until she felt better. 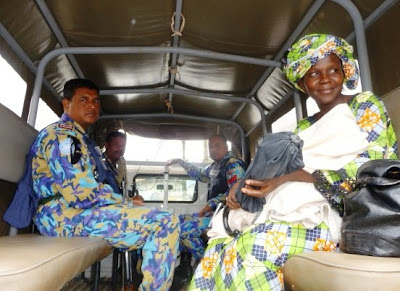 Overall, the march was a great success. The women's voices sang out to stop violence against women and children and demanded peace in DR Congo.
With love and gratidude,
Posted by Dr. Victoria at 10:34 PM No comments: Links to this post